Hello fellow Sugarbook lovers.  Thanks for checking out our last book review for 2019.  We hope to have a list of the books we will be reading in January sometime after the 2nd week in December.  We may try some new things next year, maybe have some interactive meetings……we won’t make any promises, but we’ll keep you informed.  Now on to the reviews for the month.  We read Hard to Love by W. Winters and Bromance Book Club by Lyssa Kay Adams.  Let’s begin with the first one that we discussed.

Termed “Hard to Read” by one of our members, Hard to Love was not a favorite… at all.

Of the six of us, four were able to complete it; the other two just could not get into it after making several attempts.  This is the story of Jase and Laura who was introduced to most readers in some previous series by the author.  The book begins with a scene were they come together after some time apart that is filled with tension.  It then goes to their burning hot romance that is new and exciting, but been in the making for quite some time (one can assume).  Jase has a crew that is somewhat gansta, but maybe trying to get out of the drug selling part. They’re  still keep underground fighting in the mix with the club they are soon to open being the front.  They also try to “police” they’re turf from too much drug activity by taking out dealer supply if they get too cocky.  Laura loves Jase, but wants to go school and make something more of herself.  She is dealing with the grief of losing the grandmother that basically raised her, by staying in her grandmothers house that is in much needed repair.  Although Jase and Laura have great love for one-another, the directions that they want to go in are not the same.

Many times you will read a sequel knowing you  didn’t like the first book to that you can find out about another character that you possibly liked or to clear up loose ends.  Not so with this book…..knowing the second book could tie up cliffhanger that this book left you with did not entice us to continue with the series.  We normally keep the books on our tablet until after the meeting so that we can reference parts of the book if necessary.  This time around immediate deletion occurred by the majority of us.  Someone stated that it read like a really bad Urban Fiction novel, and that wasn’t a good thing.  It just didn’t grab our attention.  Jase did not listen to Laura when she said she wanted out of the “life”.  Laura just seemed really young although there was only a three year age difference and she had basically been living in the “life” for most of her life…first with her father being a part of it and then being with Jase.  When it was all said and done we gave this book

And that was really hard to do.

The next book was a lot better.  It actually came out the week of our meeting; but surprisingly most of us enjoyed it enough to finish it before the meeting.  What does that tell you? 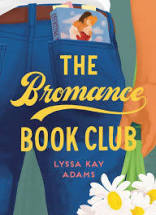 This was the story of Thea and Gavin and a slew of other characters that you really ended up loving.  Thea and Gavin are a married couple and parents of 4-year old twin daughter, that have recently separated and Thea has asked for a divorce that Gavin does not want.  Enter his best friend and baseball teammate along with some other prominent men from the city to invite him to join their book club.  This isn’t any usual book club, this book club reads romance novels to make them better partners to their significant others (spouses, girlfriends, even dates).  Gavin can’t believe that a romance novel will help him repair his marriage, but he’s desperate and gives it a shot.  Surprise, some of his girly stuff is actually working; but there are demons Gavin and Thea are both facing that causes some bumps in the road.

This book was well liked by all who read it and much anticipation is had for the next book.  Admittedly, Thea was not liked until about half-way through the book.  The issues that she had made things so much harder.  Thea spent so much time waiting for the other shoe to drop, that she sabotaged her marriage.  She should have not conformed to what she felt people wanted her to be and been true to herself.  It lead to her being frustrated with Gavin.  It wasn’t Gavin or her marriage that made her feel fake, it was because she didn’t speak up.  She didn’t ask for what se wanted or needed.  We were also not a huge fan of the way her sister was so disrespectful to Gavin.  This was his house she was living in and she was very snarky and provided more tension than was necessary.  We won’t let Gavin get away scott-free either….his pride did lead to some problems.  Because he was afraid to say what was on his mind, communication was broken down with both of them.  They needed to communicate with each other and stop letting past hurts and negative input way in their decisions.  Based on this you would think we didn’t like the book, but nope….we really enjoyed it.  When things were working for Thea and Gavin, it was working,  The romance story that was Gavin’s guidebook was interesting and his book club members were hilarious.  This book received

.  As stated earlier, the next book in the series will be read even if it’s about the sister, whom we weren’t a fan of until the very end of the book.

That’s all for now.  Thanks for taking the time to visit our site.  Next month we will not have an official book club meeting, it will be our annual holiday dinner get-together.  However, we decided to visit a classic (or so some of us think) written by Kristen Ashley.  If you have read any of the books in her Fantasyland series give us your thoughts.  We will be reading the first book, Wildest Dreams.  It will be a reread for half of us and a first time for the rest.  It’s a favorite and one we are looking forward to discussing.  We may post our thoughts, but will definitely post what we will be reading in January,  Until next time.